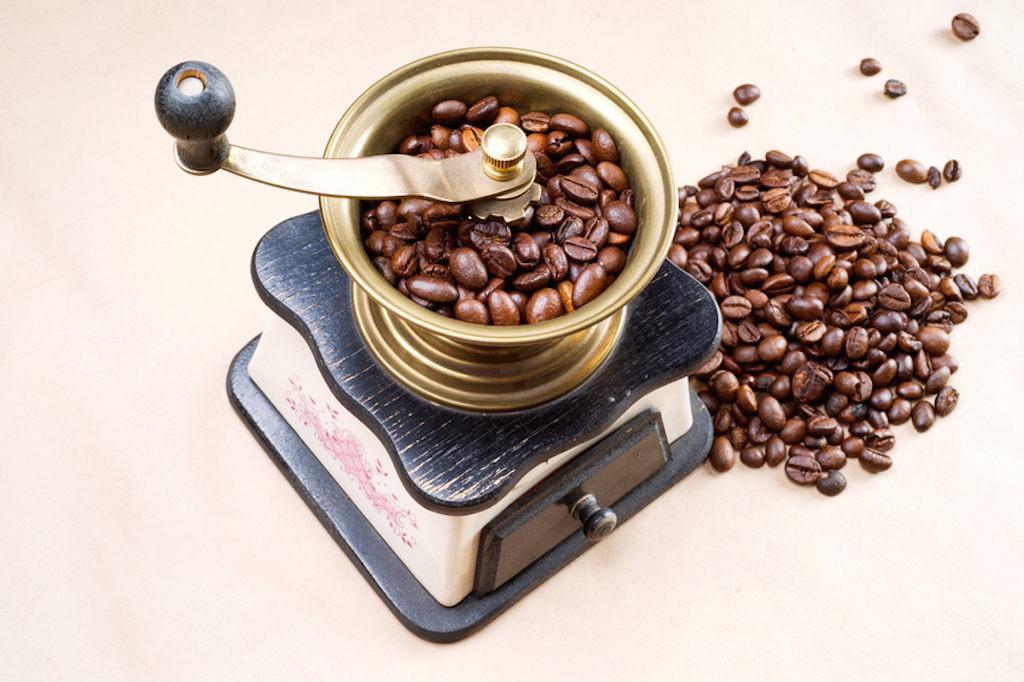 To grind means ‘to crush into small particles’ or ‘to produce by crushing,’ as mills do with grains. It also means ‘to sharpen something’ or ‘to make it smooth’ by rubbing it. It can mean to ‘rub together’ as well. Informally, to grind means ‘to work or study for long hours,’ usually with the adverb “away,” and also ‘to move your hips suggestively against another person when dancing.’ A grind is the size to which particles are ground and, informally, it is really tedious and uninteresting work, and also a person who studies a lot.

grind out: to produce in a mechanical way. Example: “Kevin doesn’t enjoy his job; he just grinds out the work until it’s time to go home.”

to grind on someone’s nerves (US): it means that something (or someone) is annoying. Example: “That drilling is grinding on my nerves! I hope they finish repairing the street soon.”

Grindhouse is an informal term in the US for a type of movie theater that shows back-to-back B movies (that means it shows them one after the other). This type of movie theater doesn’t really exist anymore, but there is a 2007 movie called Grindhouse, which is a double feature (essentially two movies) written, produced, and directed by Robert Rodriguez and Quentin Tarantino, made in a similar style to the kinds of movies that used to show at grindhouses. You can see the trailer here:

There is an expression in English, to keep (or to hold) your nose to the grind (or the grindstone), which means ‘to be hard at work.’ Example: “If you keep your nose to the grindstone, you’ll finish your essay this evening.” It’s been used since the 15th century, but nobody really knows where it came from. Some people think it may have come from millers making flour, since they sometimes put their noses on the millstones to see if it was overheating. Other people think it refers to knife sharpeners, who often bent down very low when they worked, almost touching their noses to the stone they used to sharpen their knives.

Grind dates back to before the year 950, as the Old English verbs grindan (meaning ‘to rub together,’ ‘to crush into powder’ ‘to grate’ or ‘to scape’) and forgrindan (to destroy by crushing); while the former survived through the Middle English grinden, forgrindan fell out of use, and its meaning was absorbed by grind. It can be traced back to the Proto-Germanic grindanan and the Proto-Indo-European root ghrendh– (to grind). Grind is related to the Dutch grenden (to grind) and grind (gravel or shingle), the Latin frendere (to gnash your teeth), the Greek khondros (corn or grain), the Frisian griene (to grind or mill), the Albanian grind (to brawl or fight) and the Lithuanian grendu or gręsti (to scrape or scratch), as well as the English word ground. The sense ‘to make smooth or sharp using friction’ first appeared around the year 1300, and the figurative sense ‘to work or study for long hours’ is from the mid-19th century. The noun, meaning ‘the gnashing of teeth,’ dates back to the 11th century, and comes from the verb. The sense expanded to ‘the act of chewing or grinding’ around the year 1200. The sense ‘steady, hard or tedious work’ first appeared in the mid-19th century.

See full definition
Learn more about grind in our forums

Grind in other languages