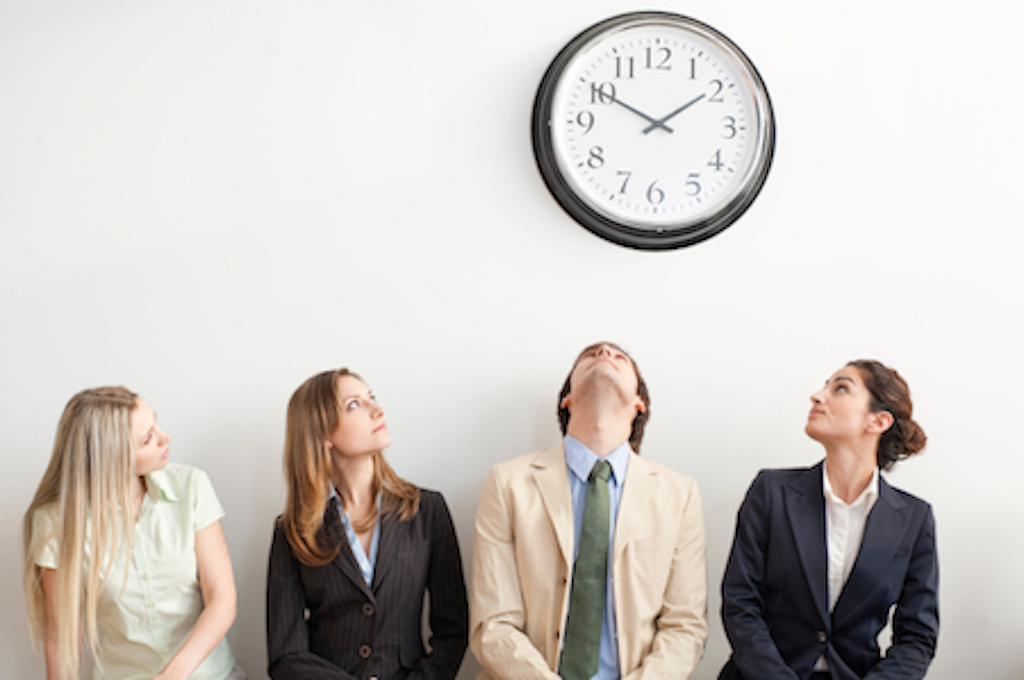 To wait means ‘to remain in a place or state without doing anything until something expected happens.’ It also means that something will be left for later, or postponed. In addition, wait means ‘to look forward to something,’ especially when used in the negative (eg, “I can’t wait”). To wait on somebody means ‘to serve food and drinks to someone.’ As a noun, a wait is the period when you wait for something.

wait up (phrasal verb, informal): stay up late waiting for someone. Example: “Don’t wait up, Mom! I’ll be late tonight!” Wait up can also mean ‘wait for someone else to join you when they’re walking or running.’ Example: “Wait up! I’m tired and can’t walk that fast.”

waitstaff: the waiters and waitresses who work in a restaurant. Example: “Our restaurant can’t open until we hire the waitstaff.”

In the sense of serving, when talking about people, wait is always used with the preposition on. Example: “The lords and ladies sat at the table eating and drinking, while the staff waited on them.” However, wait can be used without a preposition to describe somebody’s job as a waiter or waitress, by saying wait tables. Example: “Neil waited tables to make extra money while he was in college.” This use is mainly US. In the UK, people would be more likely to say work as a waiter/waitress.

Wait, originally meaning ‘to watch with hostile intent,’ ‘to lie in wait for,’ or ‘to plot against,’ dates back to around the year 1200, in the form of the Middle English verb waiten. It came into English from the Anglo-French and Old North French waitier (to watch), from the Old French gaitier (‘to defend, watch out or be on your guard,’ as well as ‘to lie in wait for’). It probably came into French from the Frankish whaton or another Germanic source, and can be traced back to the Proto-Indo-European root weg– (to be strong or lively). Wait is related to the Dutch wacht (a watching), the Old High German wahten and German wachten (to watch or to guard), and the Old High German wahhon (to watch or be awake), as well as the Sanskrit vajah (force or strength) and vajayati (drives on); the Gothic wakan (to watch); the Latin words vigil (watchful or awake), vigere (to be lively or thrive), velox (fast or lively), vegere (to enliven) and vigor (liveliness or activity); and many modern Romance language words that come from these, such as the Spanish vigor (liveliness), vigilar (watch or look out for) and veloz (fast), the French guetter (to wait) and surveiller (to survey or look out for), or the Italian veloce (fast) and vigore (liveliness), to name a few. It is also related to many English words, such as awake, bewitch, surveillance, vedette, vegetable, velocity, vigilant, waft, wake, wicked and witch. The sense ‘to remain someplace’ appeared in the late 14th century, as did ‘to stand by in attendance to someone.’ The specific sense ‘to attend at the table’ was first used in the mid-16th century. The noun, originally meaning ‘a watcher or onlooker,’ dates back to the early 13th century, and came from the Old North French noun wait (look-out or sentry), from the verb waitier. The sense ‘an ambush or trap’ appeared in the late 14th century, while ‘time occupied waiting’ and ‘an act of waiting’ date back to the mid- and late 19th century, respectively.

See full definition
Learn more about wait in our forums

Wait in other languages