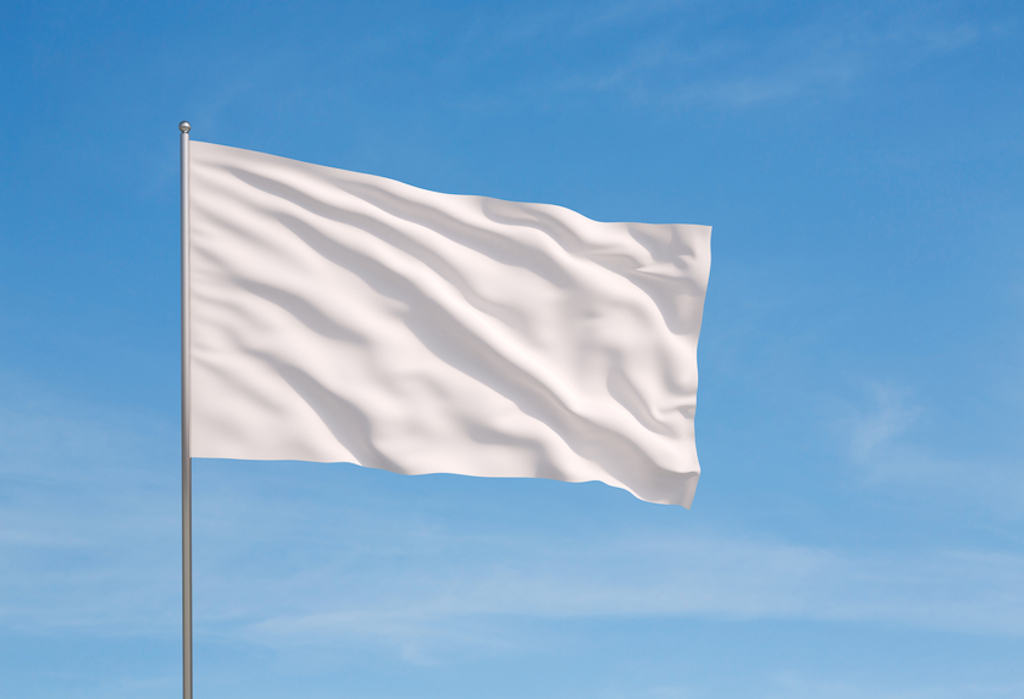 The white flag is used in war to ask for a negotiation.

Most commonly, a flag is a rectangular piece of cloth used as a symbol, usually of a country or other organizations. Figuratively, flag is used to talk about the values and feelings associated with your country. A flag is also any distinctive mark attached to a page to call someone’s attention to it. In computing, a flag is symbol that identifies important data. As a verb, to flag means ‘to decorate with flags,’ ‘to raise a flag to call attention to something,’ as done is sports, and ‘to stop a taxi or vehicle as if waving a flag’ (in this sense, it is usually used with the adverb down). To flag also means ‘to mark a page or a computer file for attention.’ Flag has another unrelated meaning as a verb, ‘to fall off in energy or activity’ and ‘to hang loosely.’

raise the white flag: The white flag was used to admit defeat and surrender on the battlefield, or to signal that a person or group was unarmed and wanted to talk. Historians from Ancient Rome (around the year 100) mention its use, though it may have been used even earlier, in the battlefields of what is now China. We use the expression mostly figuratively these days, either to admit defeat or to try to solve a conflict by talking. Fly the white flag and hoist the white flag are also used in the same sense (hoist means to raise or move something up). Examples: “After realizing they were surrounded, the small band of rebels put down their swords and raised the white flag.” “I didn’t want to argue over the color of the walls forever, so I raised the white flag and told my husband he could paint the kitchen yellow if he wanted.”

The oldest meaning of flag is actually one few people know today: it is a kind of plant, usually one that grows in wet areas, with long, grasslike leaves and pretty flowers. Some people even think that the meaning we know today may come from the plant, because its flowers fluttered in the breeze. Nowadays, we mostly know these plants by their more common Greek name, iris, though some, like the blue flag iris, still retain their former name.

Flag, meaning ‘a type of plant that grows in moist areas,’ dates back to the late 14th century. It was originally used for any reed or rush, but the sense narrowed to ‘iris’ by the 15th century. It is thought to have come into English from a Scandinavian source, such as the Danish flæg (yellow iris) or from the Dutch flag, though some linguists have also suggested a figurative connection with the more common senses of flag (which you’ll find below) on the idea of something that flutters in the breeze. The name iris, which is the flower’s scientific name and is derived from the Latin, eventually took over. The sense we now consider the most common, ‘a cloth ensign,’ dates back to the late 15th century. Its origin is unknown. Though it is related to similar words in other Germanic languages, such as the German Flagge, the Dutch vlag, the Danish flag and the Swedish flagg, it was recorded in English first. It is thought to have evolved as a variation of the Middle English verb flacken or flakken (‘to flap or flutter,’ late 14th century), which probably came into English from the Old Norse flaka (to flutter, flicker or hang loose), though it also could have formed independently, from an imitation of the sound of something flapping in the wind. Flag, the verb meaning ‘to flap or flutter loosely,’ dates back to the mid-16th century. Like the possible origin of the noun, it evolved as a variant of the Middle English verb flacken or flakken. The sense ‘to go limp, droop or become languid’ was first recorded in the early 17th century, and has been used figuratively since it appeared. The sense ‘to place a flag on or over something’ dates back to the late 19th century, and comes from the main noun meaning of the word, while ‘to mark with a flag to call attention to something’ is from the 1930s. This sense has been used figuratively to mark something important or something that needs to be double-checked, as well as someone who needs to be investigated or (in bars) not served any more alcohol, since the 1980s.

See full definition
Learn more about flag in our forums

Flag in other languages