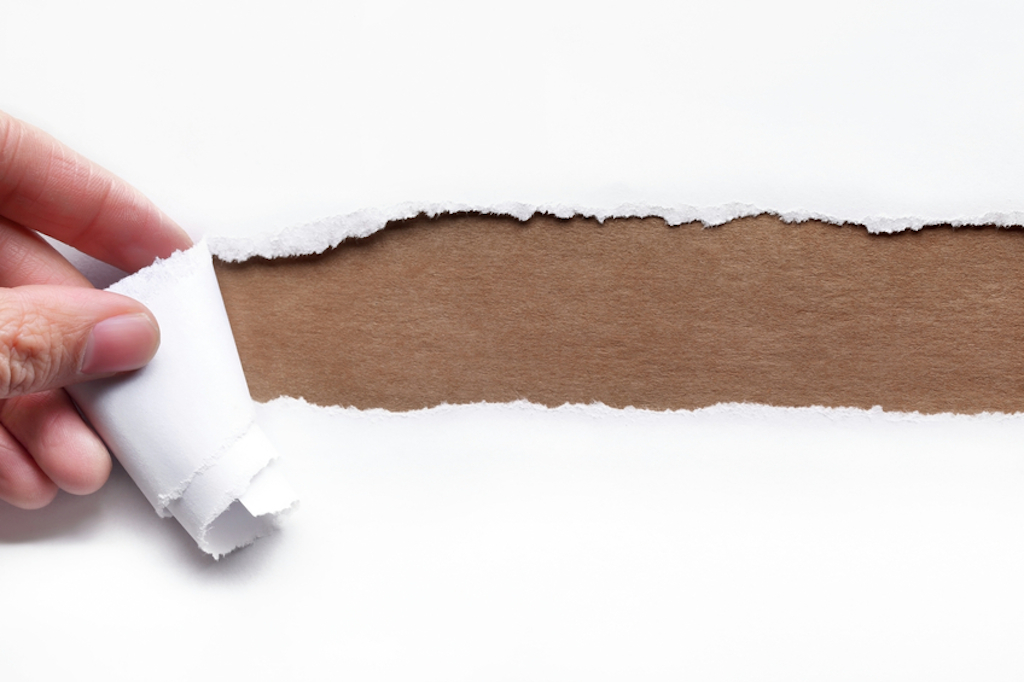 A tear is a drop of liquid that comes out of our eyes when we cry. As a verb, we can use tear to talk about eyes, meaning ‘to fill with tears.’ However, tear has another and completely different meaning; as a verb, it means ‘to pull something apart or into pieces using force’ or ‘to make a hole in something in the same way.’ Used with away it also means ‘to remove yourself with effort’ or ‘to take something away with violence.’ In this sense, and as a noun, a tear is the act of tearing, a hole that has been torn in something, and, figuratively, a burst of passion.

in tears: crying. Example: “John was in tears by the end of the movie.”

tear something up: rip something into pieces. Example: “Sonya printed out her speech and read through it, but she didn’t like it, so she tore it up and started again.”

tear something down: demolish, destroy. Example: “That old building is beyond repair, so the council is going to tear it down and build something new.” You can also use this phrase figuratively to talk about thoroughly refuting somebody’s argument. Example: “The government claimed the policy was necessary, but the opposition tore their arguments down.”

tear into something: open something by pulling it apart. Example: “Ben tore into his birthday presents.”

tear something off: sever something by pulling it. Example: “Jared was so hungry, he tore off a piece of bread and started eating it.”

Listen to Joy Division with “Love Will Tear Us Apart” here:

The expression tear (or pull) your hair out is often used in English, but it doesn’t literally mean someone is pulling out handfuls of hair. We use this expression to mean that we are very stressed or worried about something, especially when we are running out of ideas for a solution to a problem. Example: “Carl’s daughter refuses to go to school. He’s tried everything, but even if he takes her to class, she just leaves as soon as she can. He’s tearing his hair out, the poor man!”

Tear, meaning ‘a drop of water falling from your eye,’ dates back to before the year 900, as the Old English noun teahor or tæhher, which later became tēar, and then, in Middle English, teer. In Old English, it could also mean ‘nectar’ or, more generally, ‘something distilled into drops.’ It can be traced back to the Proto-Germanic root tahr– or tagr– and the Proto-Indo-European dakru-, and is related to the Old Norse and Old Frisian tar, the Old High German zahar, the German Zähre, the Gothic tagr, the Old Latin dacrima and Latin lacrima, the Irish der, the Welsh deigr and the Greek dakryma, all of which mean ‘tear.’ The expression in tears, meaning ‘crying or weeping,’ was first used in the mid-16th century. The related verb, meaning ‘to shed tears,’ dates back to the early 15th century, and comes from the noun. The sense ‘to fill with tears,’ more common in the US, dates back to the mid-17th century. The verb tear, meaning ‘to pull apart,’ is unrelated. It also dates back to before the year 900, as the Old English verb teran (to tear or lacerate) and later the Middle English teren. It can be traced back to the Proto-Germanic teran and the Proto-Indo-European root der– (to split, flay or peel). Tear, in this sense, is related to the Old Saxon terian and the Middle Dutch teren (to consume), the Old High German zeran (to destroy) and the German zehren and Gothic ga-tairan (to tear or destroy), as well as the Sanskrit drnati (cleaves or bursts), the Greek derein (to flay), the Armenian terem (I flay), the Old Church Slavonic dera (to burst apart), the Breton darn (piece) and English words such as dermal, hypodermic, pachyderm, taxidermy, tart and turd. The sense ‘to pull away by force’ first appeared in the late 13th century. The noun, meaning ‘the act of ripping,’ as well as ‘a rip or hole,’ dates back to the mid-17th century, and comes from the verb.

See full definition
Learn more about tear in our forums

Tear in other languages