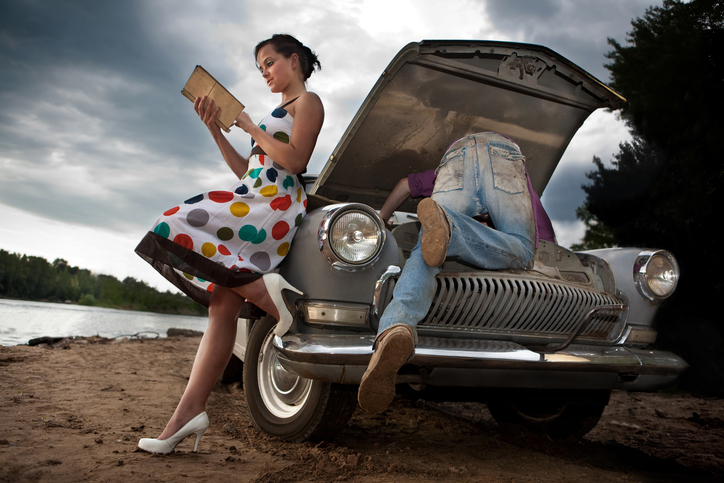 It looks like these two got stranded on the strand.

To strand means ‘to drive or run onto a shore’ and it’s used to talk about boats or water creatures such as whales. Figuratively, to leave in a helpless position is also to strand. As a noun, a strand is a shore or a beach, in particular the part of the shore between the tide marks. Unrelatedly, and also a noun, a strand is a part of a rope or one string or thread that is twisted together to form a rope, a tress of hair, or, figuratively, a thread or threadlike part of something.

Listen out for the lyric “I am stranded, caught in the crossfire.”

The Strand is also the name of one of the main streets in London. It takes its name from the fact that originally it ran along the shore of the River Thames, before the Victoria Embankment was built. You can find references to The Strand in various literary works, such as Virginia Woolf’s novel Mrs Dalloway or T. S. Eliot’s poem The Waste Land. There is also a music hall song called “Let’s All Go Down The Strand.” You can listen to a version of it sung by Blur here:

The Strand also features as a square in the UK version of the board game Monopoly.

Strand, as a noun meaning shore or beach, or more precisely, ‘the part of the beach between the tide marks,’ dates back to before the year 1000. The Old English strand, meaning ‘sea shore,’ hasn’t changed much in spelling or meaning, as you can see. It can be traced back to the Proto-Germanic strandaz, though its origin before then is unknown. Some linguists think it could have come from the Proto-Indo-European root ster- (to stretch out). Strand is related to the Danish and Swedish strand (beach, shore or strand), the Old Norse strönd (shore, border or edge), and the Old Frisian strond, Middle Dutch strant, Dutch strand, Middle Low German strant, and German Strand, all of which mean ‘beach.’ Shore also used to mean ‘river bank,’ but that meaning disappeared around the 13th century. The verb, originally meaning ‘to drive aground on a shore,’ dates back to the early 17th century, and comes from the noun. The figurative sense, ‘to leave helpless,’ first appeared in the early 19th century, and has since become the verb’s most common use. Strand, the noun meaning ‘an individual fiber of string, rope or hair,’ dates back to the late 15th century. It is unrelated to the other senses. Though the origin is uncertain, most linguists agree that it probably came into English from a Germanic source, although there’s also the possibility that it came into English from a French word of Germanic origin. It is (likely) related to the Old High German streno (lock, tress or strand of hair), the Middle Dutch strene (a skein or a hank of thread) and the German Strähne (a skein or strand).

See full definition
Learn more about strand in our forums

Strand in other languages