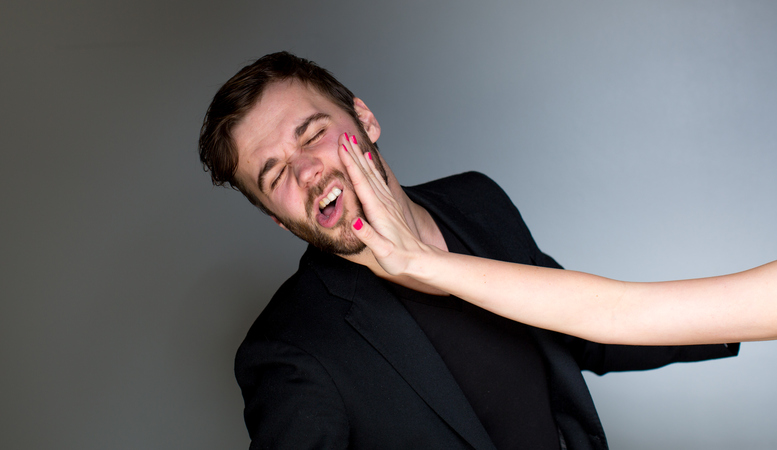 A slap is a sharp blow with an open hand and also the sound made by such a blow. The verb to slap means ‘to strike sharply with an open hand,’ ‘to hit your hand against something,’ and also ‘to put down with force.’ Informally, ‘to put or place quickly’ is also to slap. As an adverb, and quite informally, slap means ‘straight, directly.’

slap down: to oppose or criticize sharply. Example: “Negotiations have reached an impasse, after the latest proposals were slapped down by the other side.”

slap in the face: a rebuke, attack, or insult. Example: “Frankly, the way the government has handled this issue has been a real slap in the face for democracy.”

slap on the back: a congratulatory gesture. Example: “You’ve all worked so hard to get this project finished on time; you deserve a slap on the back.”

slap on the wrist: a reprimand. Example: “Karen broke the speed limit, but the officer let her off with a slap on the wrist after she explained that it was an emergency.”

slap and tickle (UK): playful sexual activity. Example: “The young couple were pleased to have the house to themselves for a bit of slap and tickle.”

slapdash: careless, hasty. Example: “The teacher was disappointed in the student’s slapdash work.”

slap-bang: exactly. Example: “There was a hole, slap-bang in the middle of the floor.”

Watch Fred Astaire singing “Slap That Bass” in the 1937 movie Shall We Dance?

In Scottish English, a slap is a gap or opening, as in a fence, wall, cloud bank, or line of troops, and also a mountain pass.

In UK English, slap is also an informal term for makeup. It was originally theatrical slang for stage makeup, but has come to be used for any makeup, especially if it is thickly or carelessly applied. Example: “I’ll just stick some slap on my face and then I’m ready to go.”

Both the origin of slap, meaning ‘a sharp blow with an open hand,’ as well as the sound it makes, and the date it appeared in English are uncertain. Some linguists believe it came into English in the early 17th century from the Low German slapp or slappe, which is of an expressive or imitative origin. Others believe slap existed in English much earlier, around the mid-15th century. If this is the case, it would have had and imitative origin on its own, and the similarity to equivalents in other Germanic languages (the Low German slappe and the German Schlappe, for example) is because of the sound itself. The figurative sense meaning ‘an insult or reprimand’ was first used in the early 18th century. The slap origin as a verb (meaning ‘to strike with an open hand’) is less certain, as it seems to have come from the noun in either of its origins, but linguists disagree whether it appeared in the late 15th or mid-17th century. Slap has been used as an adverb since the mid-17th century meaning ‘suddenly’ and since the early 18th century meaning ‘directly.’

See full definition
Learn more about slap in our forums

Slap in other languages