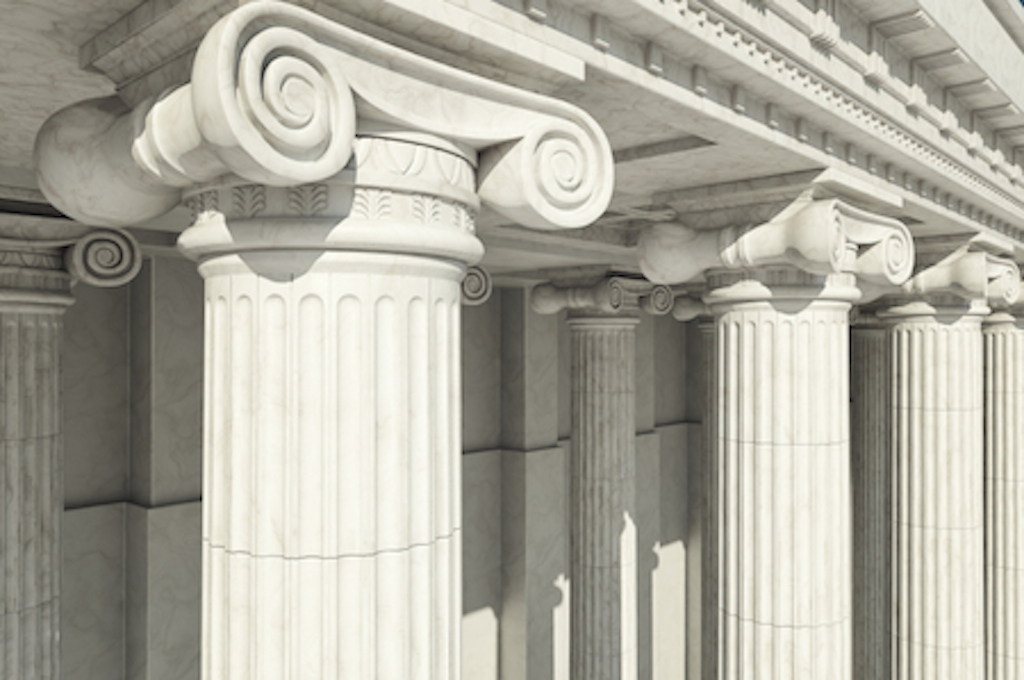 The columns bear the weight of the roof.

A bear is not only a large animal. As a verb, to bear means ‘to hold or carry something,’ or ‘to endure it.’ It also means ‘to give birth,’ or ‘to produce flowers or fruit.’ When you can’t bear something, it means that you really don’t like it or that you find it difficult to tolerate or cope with. Bear also means ‘to go in a particular direction.’ Many of these meanings of bear are generally used in more formal contexts.

bear with me: a way to ask someone to be patient. Example: “Could you bear with me for a few minutes? I’m not quite ready to go.”

bear in mind: take something into account. Example: “Bearing in mind that we need to pay for repairs to the house, we can’t afford a holiday this year.”

bear down (phrasal verb, US): work harder. Example: “We have to finish this project by Friday and there’s still a lot to do. We need to bear down.”

Listen to Frank Sinatra singing “Triste” here. Listen out for the lyric: “Your beauty is an airplane, so high my heart can’t bear the strain.”

A bear is a big, strong and hairy man, especially in the expression “a bear of a man.” The term bear for this kind of man is particularly used in gay culture, with bears having been part of the gay community since the late 80s.

Don’t confuse bear with bare, which means that something is not covered. For example: “She wore a short skirt and her legs were bare.”

Bear, meaning ‘a large mammal,’ dates back to before the year 900, in the form of the Old English noun bera (Middle English bere). It can be traced back to the proto-Germanic bero (‘a bear,’ but literally ‘the brown one’) and the Proto-Indo-European root bher– (‘bright’ or ‘brown’). Bear is related to the Old Norse björn, the Middle Dutch bere, the Dutch beer, the Old High German bero and the German Bär (all meaning ‘bear’), as well as the Old English brun (dark or dusky), the Lithuanian bėras (brown), the Greek phrynos (‘toad,’ but literally ‘the brown animal’), and English words such as beaver, berserk, brown, brunette and burnish, and even the name Bernard. Bear has been used to describe ‘rude, uncouth or gruff men’ since the mid-16th century, but only started to apply to a specific aesthetic, particularly in gay culture, in the late 1970s. Bear, meaning ‘to hold or carry something,’ ‘to endure something,’ ‘to support or hold up,’ ‘to give birth to,’ ‘to produce’ and ‘to wear’ also dates back to before the year 900, this time as the Old English verb beran (Middle English beren). It can be traced back to the Proto-Germanic beranan and the Proto-Indo-European root bher-, meaning ‘to carry a burden,’ ‘to bring’ or ‘to give birth.’ It must be noted that, though the PIE root looks the same as the root for the animal, they are in fact two different roots, so these two senses of bear are not related in English. The verb bear is, therefore, related to the Old Saxon beran and the Old Frisian bera (to give birth), the Middle Dutch beren (to carry a child), the Old High German beran and German gebären, and the Old Norse bera (‘to carry, bring, bear, or endure,’ as well as ‘to give birth’), and the Gothic bairan (to carry, bear or give birth to), not to mention many English words, including aquifer, barrow, bearing, birth, burden, circumference, conference, defer, differ, ferret, fertile, metaphor, offer, periphery, prefer, reference, suffer, transfer and vociferate, as well as names such as Berenice, Christoper and even Lucipher.

See full definition
Learn more about bear in our forums

Bear in other languages