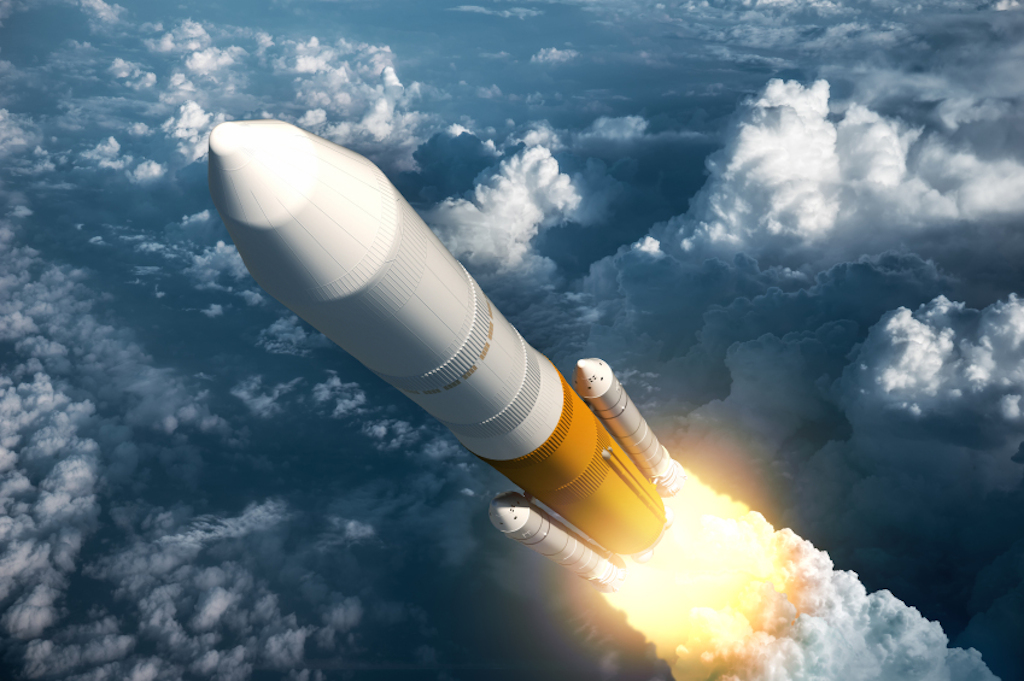 A rocket is any tube-like device that contains fuel, which burns and makes it fly through the air; it can be used for fireworks, signaling, etc. A rocket is also a space capsule put into orbit. As a verb, it means ‘to transport with a rocket,’ ‘to move very rapidly,’ and, informally, ‘to increase suddenly.’ Rocket has another completely different meaning; as a noun, it is a Mediterranean plant used in green leaf salads, although it is more commonly known as arugula in US English.

give someone a rocket (UK): reprimand someone severely, get very mad at someone. Example: “The boss gave Joe a rocket when he arrived 30 minutes late for an important meeting.”

Someone who works on rockets, like a scientist or engineer, is called a rocketeer. The Rocketeer is the title of a 1991 movie and you can see the trailer for it here:

In English we also have the related word skyrocket. This word can refer to a kind of rocket, but (perhaps more commonly) it is an informal verb meaning ‘to increase a lot’ or ‘to increase astronomically.’ Example: “The cost of US colleges has skyrocketed since my parents were kids.” Skyrocket is the opposite of plummet, one of our first Words of the Day.

Rocket, meaning ‘a self-propelling device,’ dates back to the early 17th century. It came into English from the Italian rochetto (a bobbin), the diminutive of rocca (a distaff, which is a device used for spinning thread). It is thought to have come into Italian from a Germanic source, and can be traced back to the Proto-Germanic rukkon– and the Proto-Indo-European root rug– (fabric or spun yarn). Rocket is, therefore, related to the Old High German rocko, the Old Norse rokkr, the German Rocken, the Swedish rock and the Icelandic rokkur (all meaning ‘a distaff’). The sense ‘a fuel-propelled device,’ first used for fireworks, dates back to the early 20th century. The verb, which originally meant ‘to attack with rockets,’ dates back to the late 18th century, and comes from the noun. The sense ‘to spring like a rocket’ was first used in the mid-19th century. Rocket, the noun meaning ‘a leafy green plant used in salads,’ is a bit older; it dates back to around the year 1500. It came into English from the Middle French noun roquette, which was in turn borrowed from the Italian rochetta, diminutive for ruca (a type of cabbage). It can be traced back to the Latin eruca (colewort), which is related to ericus (‘hedgehog’ or ‘beam with spikes’) and the Proto-Indo-European root ghers– (to bristle). Rocket, in this sense, is related to the Sanskrit harsate (bristles), the Avestan zarshayamna– (ruffling your feathers) and the Welsh garw (rough), as well as the English arugula and many other modern terms for the plant, and the English word horror.

See full definition
Learn more about rocket in our forums

Rocket in other languages