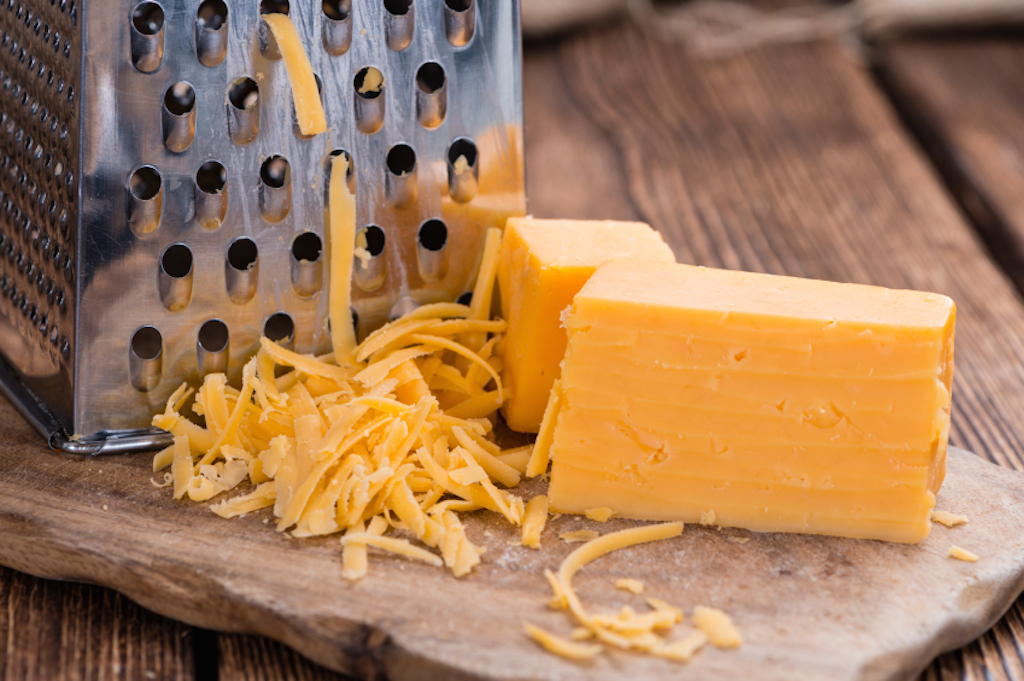 Most commonly, grate means ‘to reduce something to small pieces by rubbing it against a sharp surface with small holes.’ But grate also means ‘to make a harsh, annoying sound by rubbing two things together’ and it is used figuratively to mean that something or someone has an irritating effect. As a noun, grate is a frame of metal bars, used in fireplaces or stoves, or a metal framework in windows.

Listen to The Pet Shop Boys with their song “Up Against It” here. Listen out for the lyric “The longer you hate, the more that it grates.”

You can grate cheese or vegetables, but if you are taking little pieces off of the peel of a fruit, especially a citrus fruit like a lemon, lime, or orange, we use the verb zest instead of grate. The noun zest refers to the little pieces of the peel. Example: “Zest the lemon. Then add the zest to the mixture.” There is a special kitchen tool called a zester, which you can use for zesting, but a small grater also works very well and has more uses in the kitchen.

Grate, meaning ‘to scrape or rub,’ dates back to the late 14th century. It came into English from the Old French grater (‘to scrape or scratch off,’ ‘to erase’ or ‘to destroy’), and can be traced back to the Frankish kratton, from the Proto-Germanic krattojan. Its origin before then is uncertain, but most linguists agree that it was probably imitative. Grate is related to the Old High German krazzon (to scratch or scrape), the German kratzen (to scratch), the Swedish kratta, Danish kratte (to rake or scrape), the French gratter (to scrape or scratch) and the Italian grattare (to scrape or scratch). The senses ‘to make a harsh sound’ and ‘to annoy or irritate’ both appeared in the mid-16th century. The noun, originally meaning ‘a grill for cooking,’ also dates back to the late 14th century. Linguists disagree on whether it came into English from the Old French grate, which evolved from the Medieval Latin grāta (grating or lattice), or directly from the Medieval Latin. Either way, it can be traced back to the Latin cratis (wickerwork or hurdle) and the Proto-Indo-European root kert– (to weave or twist together). Grate is related to the Italian grata, as well as the Sanskrit krt (to spin), the Greek kartalos (a of basket) and kyrtos (fishing creel), and the English words cartilage, crate and hurdle.

See full definition
Learn more about grate in our forums

Grate in other languages