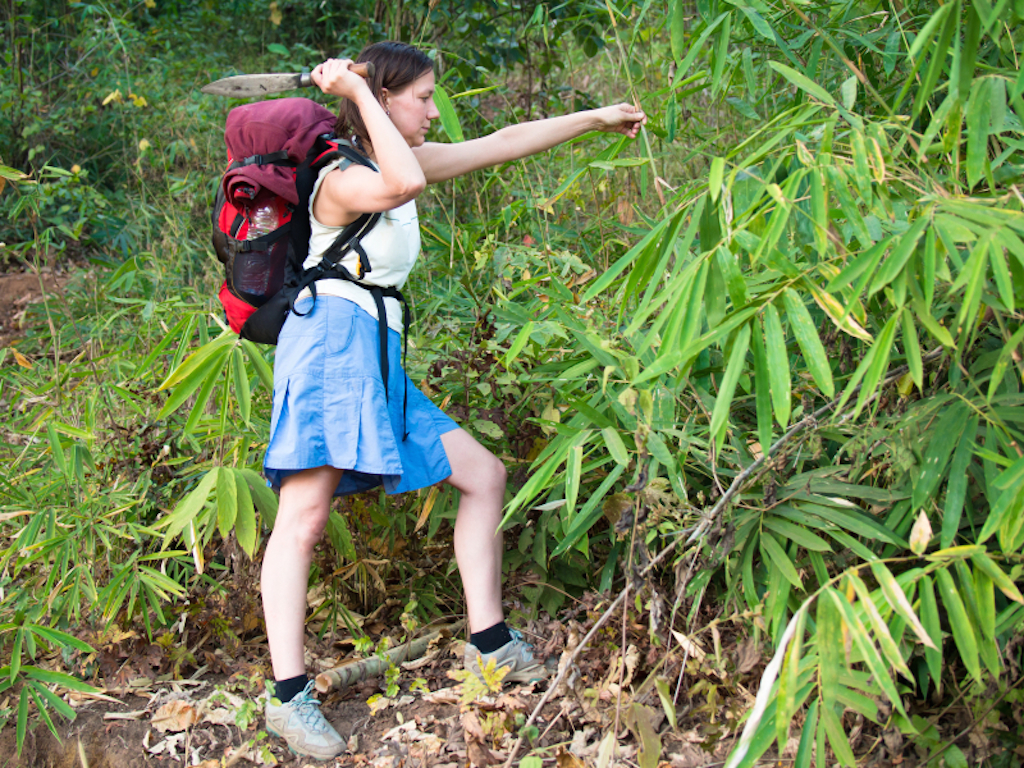 A woman hacking her way through vegetation

You may know that hack means ‘to gain unauthorized access to a computer system or data.’ However, hack also means ‘to chop or slice with rough and irregular blows‘ and also ‘to clear a path by cutting branches and trees.’ Figuratively, it can mean ‘to cut severely.’ Informally, it means ‘to tolerate’ and, in this sense, it is mostly used in the negative form. As a noun, a hack is a rough or irregular cut and also a mediocre and uninteresting writer or artist.

hack it: cope or deal with things: “Miles dropped out of college; the classes were really difficult for him and he just couldn’t hack it.”

hack someone off: annoy. Example: “The way Susan keeps correcting my grammar really hacks me off!”

Someone who hacks into computers is called a hacker. The TV show Mr. Robot is about a hacker called Elliot Alderson. You can see the trailer for the first season of the show here:

A hack can also be a horse kept for ordinary riding, especially one that is rented out. Because of this, hack also came to mean ‘a tired-out old horse,’ because often horses that were rented out were not well cared for. In UK English a hack is also a horse ride in the countryside.

Hack, meaning ‘to cut roughly or with chopping blows,’ dates back to the late 12th century, in the form of the Middle English hacken. Some linguists think it is older, since its origins can be found in the stem of the Old English tohaccian (to hack to pieces), and that is could also be influenced by the Old Norse höggva (to hew, cut or strike). It can be traced back to the West Germanic hakkon and the Proto-Indo-European root keg– (hook or tooth). Hack is related to the Old Frisian hackia (to chop or hack), the Dutch hakken, Old High German hacchon and German hacken (to hack), as well as the Russian kogot (claw), and the English words hake and hook, among others. The sense extended to ‘clear a path by cutting down trees’ by the year 1200, and the figurative meaning, ‘to get through or cope with something,’ evolved from this sense in the US in the 1950s. The noun, which originally meant ‘a tool for chopping,’ dates back to the early 14th century, and comes from the verb. The sense ‘a rough and irregular cut’ first appeared in the mid-16th century, and soon became the most common meaning. The figurative sense, ‘an attempt or try’ dates back to the late 19th century. The noun meaning ‘a person hired to do routine work’ dates back to around the year 1700. It evolved from the horse sense, which dates back to around the year 1300, and was originally short for Hackney, after the name of the place (work horses were raised there in Medieval times). It is distantly related to the other senses of hack, since the name Hackney evolved from the Old English name Haca’s Isle (or Hook Island), from the same PIE root. The sense evolved from ‘a person hired to do repetitive work’ to ‘a mediocre writer or artist’ in the early 19th century. Finally, the verb hack, meaning ‘to illegally enter a computer,’ dates back to the 1980s, and is actually a back-formation from hacker. In turn, hacker comes from figurative use of the other senses of the verb hack.

See full definition
Learn more about hack in our forums

Hack in other languages