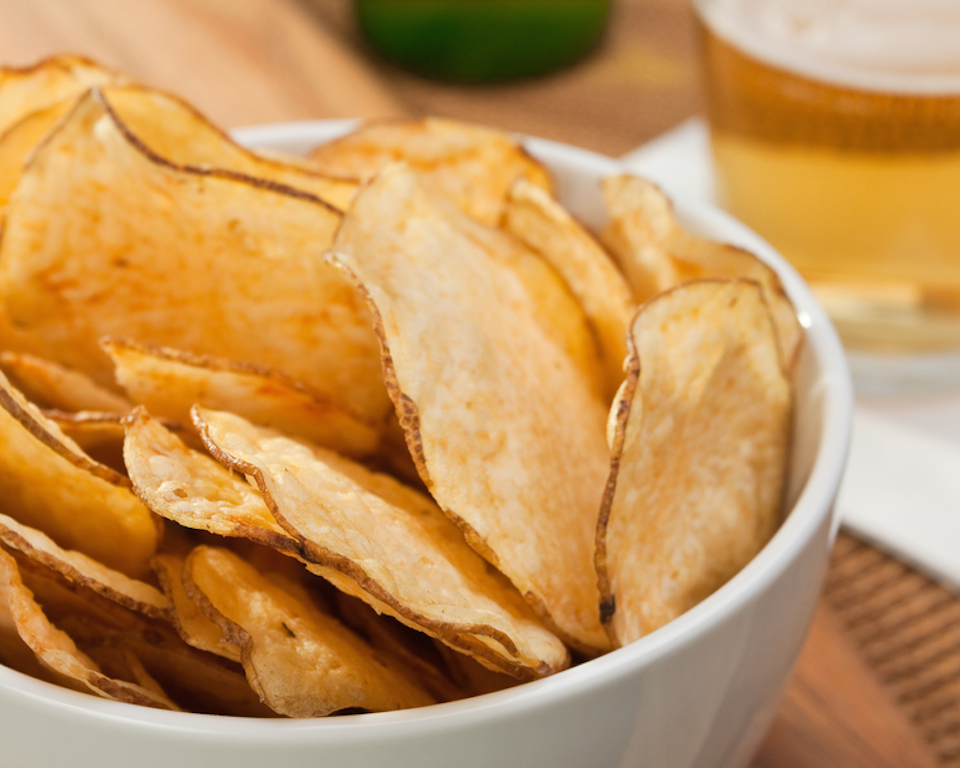 We call these chips in the US and crisps in the UK.

A chip is a small piece of food, such as chocolate, or a thin piece of something that has been broken by chopping, such as wood. It’s also a mark or flaw left on something broken. A chip is a round plastic token used in games such as roulette or poker. In electronics, a chip is a thin and tiny piece of plastic on which a transistor or an integrated circuit is formed. As a verb, to chip means ‘to cut with an axe’ or ‘to cut or break a piece of something.’

chip in: to contribute something, especially money. Example: “I know Julie wants a new smartphone for her birthday. If we all chip in, maybe we can afford to buy her one.”

have a chip on your shoulder: harbor resentment about something. Example: “Robert is very conscious that all his colleagues have college degrees and he doesn’t; in fact, he has a real chip on his shoulder about it.”

If you chip something away or chip away at something, that means you break small pieces of it off until it’s all gone. You can also use chip away figuratively, to mean that you gradually do something. “Chip Away the Stone” is a song by Aerosmith, and you can listen to it here:

In the UK, a chip is also a long, fairly thin piece of potato, fried in oil–the same thing is called a French fry or fry in the US. In the US, a chip is a very thin slice of potato fried in oil–this is called a crisp in the UK. Just to make it a bit more complicated, both crisps and French fries are called chips in Australia, but they often call French fries hot chips to make it clear what they are talking about.

Chip, meaning ‘a small piece of something separated from the main piece by a blow,’ dates back to before the year 900, as the Old English noun cipp (pronounced chip), and later the Middle English chip. Its origin is uncertain, but many linguists believe that it, together with other Germanic equivalents, evolved from a borrowing of the Latin cippus (post, stake or beam), which can be traced back to the Proto-Indo-European root keipo– (sharp post). Chip is related to the Dutch kip (small strip of wood), the Old High German kipfa (wagon pole) and the Old Norse keppr (stick). Originally, chip was mostly used to describe small pieces of wood or stone, but by the mid-18th century, it was also starting to be used for small pieces of food, especially fruit. In reference to potatoes (the type that are called French fries in the US), chips has been used in the UK since the mid-19th century. Specifically, the first written reference was in Charles Dickens’ A Tale of Two Cities in 1859. As for the thinly sliced type oil potato snack called chips in the US, they were invented in the mid-19th century as well, and a written recipe appeared in 1858. The sense ‘a small disc or counter used for gambling’ dates back to the mid-19th century, while the computer sense was first used in 1962. The verb, meaning ‘to break off in small pieces,’ dates back to the late 14th century, as the Late Middle English chippen. It can be traced back to an Old English verb, forcippian (to pare away by cutting off), which comes from the noun. The sense ‘to cut or trim into small pieces, or to diminish by cutting away a little at a time,’ first appeared in the late 15th century, while ‘to break off fragments’ is from the 18th century. The noun meaning ‘a break caused by chipping’ comes from the verb, and first appeared in the late 19th century.

See full definition
Learn more about chip in our forums

Chip in other languages