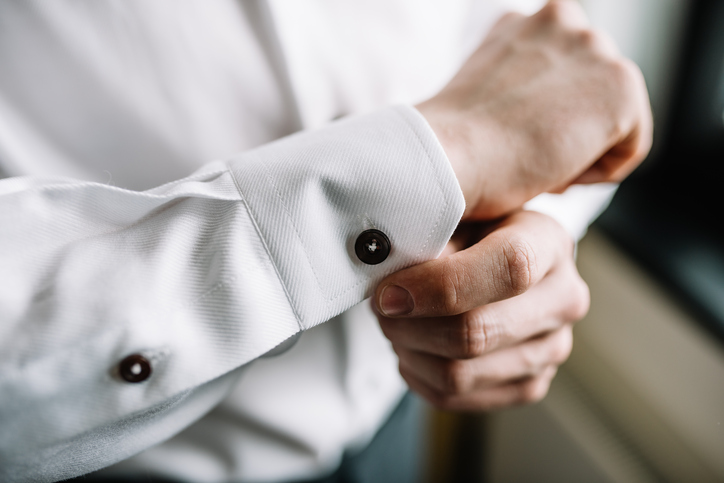 When we are talking about shirts, a cuff is fold or band at the end of a sleeve and, on trousers, mainly in US English, it’s the turned-up fold at the bottom of a trouser leg. In medicine, a cuff is part of a device for recording blood pressure: it’s the inflatable wrap placed around the upper arm. Always in the plural, cuffs are handcuffs, a pair of metal rings that can be locked around someone’s wrist, usually used by police. As a verb, to cuff means ‘to put handcuffs around someone’s wrists’ or ‘to make a cuff on an item of clothing.’

off the cuff: on the spur of the moment. Example: “The actor hadn’t rehearsed a speech, as she didn’t think she’d win, so she had to come up with something off the cuff.”

Police officers often cuff people when they arrest them and you can see it done in many police dramas and other TV shows. Here is a clip from The Simpsons in which Marge arrests and cuffs her husband Homer:

Cuff dates back to the mid- to late 14th century. The Middle English noun cuffe or coffe orignally meant ‘mitten, glove or hand covering.’ Its origin is uncertain. Some linguists think it came from the Medieval Latin cuffia (cap, hood, helmet or head covering), which was borrowed from the Frankish kuf(f)ia (headdress), and can be traced back to the Proto-Germanic kupjō (cap), though others think it may have evolved from the Old English cuffie (hood or cap), which probably also came from the same Proto-Germanic word. It is related to the Middle High German kupfe (cap) and the Spanish, Italian and Galician cofia (headdress). The sense shifted to ‘band around the sleeve’ by the early 16th century, but has only been used to mean ‘the hem of the trousers’ in American English since the early 20th century. The expression off the cuff was first used in the US in the 1930s, and came from the image of an actor reading lines from the sleeve of a shirt, rather than learning them. The verb, meaning ‘to put a cuff on,’ comes from the noun and dates back to the late 17th century. Cuff, as a verb meaning ‘to hit,’ is unrelated. It dates back to the early 16th century, and its origin is uncertain, though it probably came into English from a Scandinavian source, possibly the Swedish kuffa (to push or shove).

See full definition
Learn more about cuff in our forums

Cuff in other languages