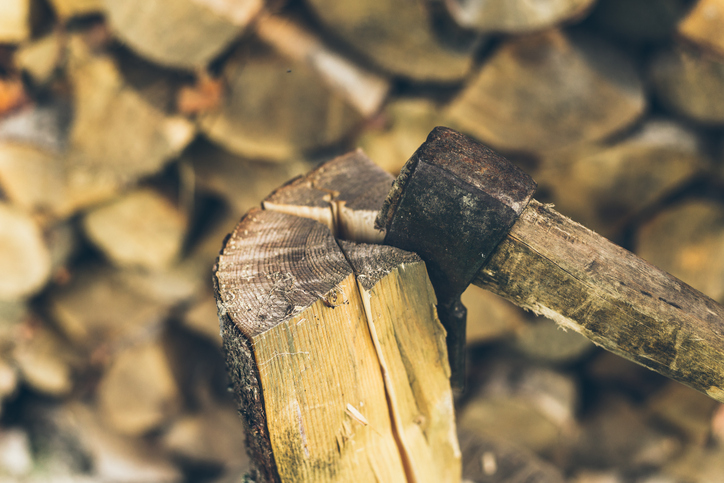 For the sense of ‘clinging to something or being faithful,’ the past tense and past participle of cleave is cleaved. For the senses to do with’ cutting or dividing,’ the past tense can be cleaved, cleft, or clove and the past participle can be cleaved, cleft, or cloven. They are all correct and there is no difference in meaning, so if you want to use the word, you can choose which one you like best!

“Rock of Ages” is a Christian hymn, written by Anglican cleric Augustus Toplady in the 18th century. It is said that he wrote the song after sheltering from a storm in the fissure of a rock (a place where the rock appeared to have been cleft) and this is reflected in the lyric “cleft for me.” You can listen to Johnny Cash’s version of the hymn here:

Cleave, meaning ‘to adhere or cling,’ dates back to before the year 900, in the form of the Old English verb cleofian or clifian, meaning ‘to stick fast or adhere,’ and also often used figuratively, and later the Middle English cleven or cliven. It can be traced back to the West Germanic kibajan and the Proto-Indo-European root gloi- (to stick). It is related to the Old Saxon klibon, the Old High German kliban, the Dutch kleven, the Old High German kleben and the German kleben (all meaning ‘to stick, cling or adhere’), as well as the Latin gluten (glue or beeswax), the Greek gloios (sticky matter), the Lithuanian glitus (sticky) and glitas (mucus), the Old Church Slavonic glina (clay) and glenu (slime or mucus), the Old Irish glenim (I cleave, or adhere) and the Old English cliða (clitha, ‘plaster’). It is also related to English words such as clay, clod, glue and gluten. Cleave, meaning ‘to split or divide,’ came about a tad later; it dates back to before the year 950. The Old English verb cleōfan (cleven or cliven in Middle English). It can be traced back to the Proto-Germanic kleuban and the Proto-Indo-European root gleubh- (to tear apart or split), and is related to the Old Saxon klioban, the Old Norse kljufa, the Danish klöve, the Dutch kloven, the Old High German klioban and the German klieben (all meaning ‘to split or cleave’), as well as the Dutch clove (a cleft). It is more distantly related to the Greek glyphe (a carving) and glyphein (‘to hollow out or cut out with a knife’ or ‘to engrave or carve’), the Latin glubere (to peel, shell or strip), as well as English words such as clever, clevis, clove (of garlic) and hieroglyphic. These verbs have both been used rarely in the past couple of centuries, replaced by stick and slice. Some linguists think this may be partly due to the spelling and pronunciation being identical since Middle English, which can always lead to confusion.

See full definition
Learn more about cleave in our forums

Cleave in other languages