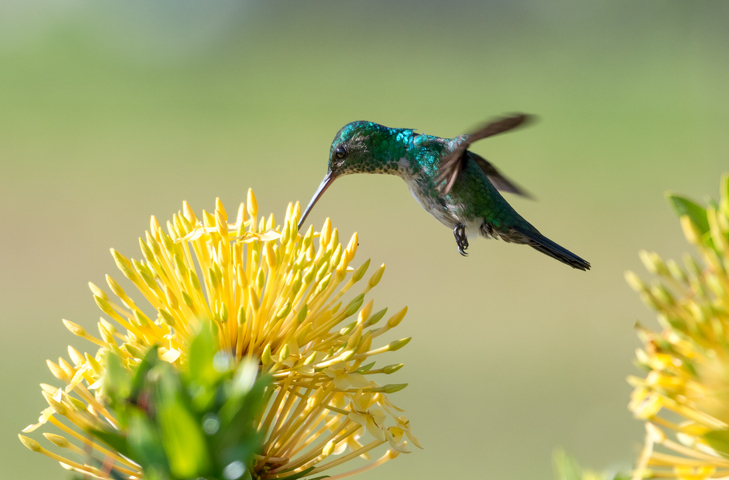 Hover means ‘to remain in the air in the same position.’ When used for people, it means ‘to wait or linger near somebody or something for more time or at a closer distance than is expected.’ When referring to a number or value, it means ‘to stay around a specific level or amount.’ Hover can also be used figuratively to mean ‘to be in a state of indecision.’

hover over: an idiom used with computers, referring to moving the mouse or cursor over something on the screen. Example: “Hover over the words to see their definitions.” It can also be used as an adjective (with a hyphen), as in “I like hover-over explanations because they clarify things I’m confused about.”

Listen to Incubus singing their song “Quicksand” here. Listen out for the lyric “I hover somewhere in between.”

Hovercrafts are vehicles that can travel on water, land, and ice because of a cushion of compressed air.

Hover dates back to around the year 1400, as the Middle English verb hoveren, a frequentative form of the verb hoven (to hover, tarry or linger), which we still have in the form of the rarely used verb hove (‘to float or rise to the surface,’ as well as ‘to remain suspended in the air’). It can be traced back to the Old English hofian (to receive into your home), from the Proto-Germanic hufa– (hill, height, farm or dwelling) and the Proto-Indo-European keup– (to arch, bend or buckle). Hover is, therefore, related to the Old Frisian hovia and the Old Dutch hoven (to entertain or receive into your home), as well as the Old English hof (court, house or dwelling), the Dutch hof (garden or court), the German Hof (yard, garden, court or palace) and the Icelandic hof (temple or hall), as well as the English hovel. Though rare, hover has also been used as a noun, meaning ‘the act of hovering,’ since the early 16th century.

See full definition
Learn more about hover in our forums

Hover in other languages