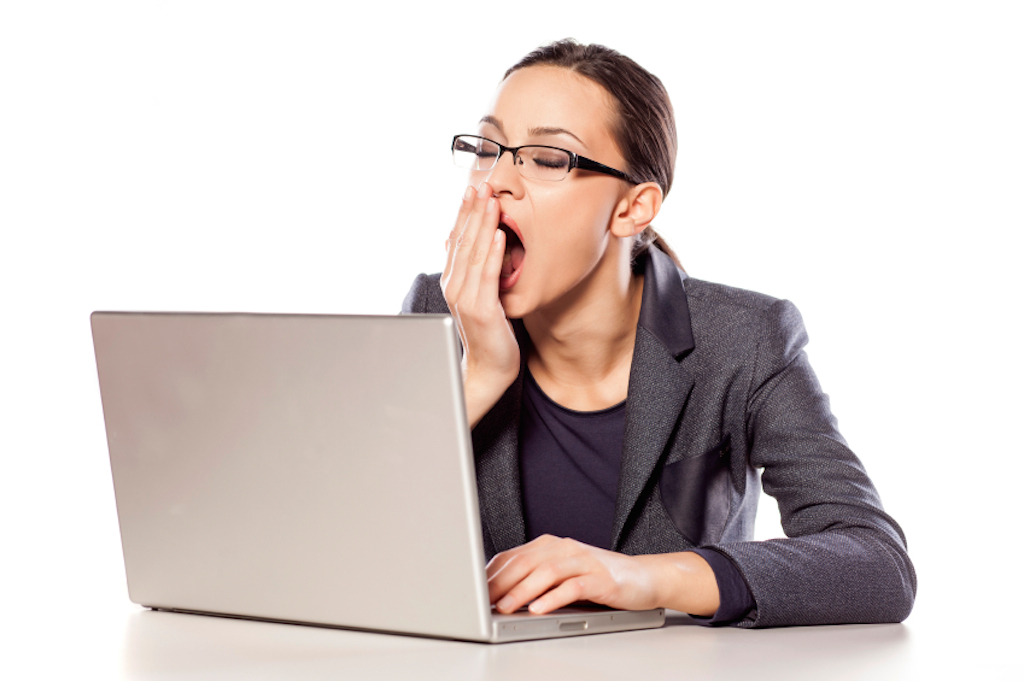 A dull day at the office

When we’re talking about knives and blades, dull means ‘not sharp,’ and it also refers to someone or something that is boring and not exciting or to something that lacks brightness. Figuratively, it is used pejoratively to talk about someone who is stupid or slow-minded; this sense is more common in the UK than in the US. As a verb, it means ‘to make something dull,’ in the sense of less bright or sharp or less acute or intense, and it can be literal or figurative.

dull-witted: stupid or slow; this is more common in the UK, and in the US we often say dim-witted instead; neither is a very nice thing to say about someone. Example: “Sarah found it hard to hold a conversation with Joe, because he was so dull-witted.”

Listen to the Kinks with their song “When Work Is Over” here. Listen out for the chorus: “Dull conversation, Living by the book, And the rules and regulations.”

Dull is also used to describe the weather and means ‘gloomy and dark.’ Example: “It was a dull day with a lot of clouds and rain.” It can also describe a type of pain that is more like an ache, rather than being sharp or acute. Example: “Bill went to see the doctor about the dull pain in his back that had been bothering him all week.”

People are often scared to use sharp knives, but actually many experts say that a sharp knife is safer than a dull one, as there is a greater risk of a dull blade slipping and that’s how people cut themselves!

Dull, meaning ‘stupid or slow in understanding’ (when referring to people) or ‘blunt‘ when referring to edges or points, dates back to around the year 1200, in the form of the Middle English adjective dul or dulle (dil, dill and even dwal were also dialectal variations at the time). Its origin is uncertain. Some linguists trace it back to the Old English adjective dol (foolish or dull-witted), or a siilar, unrecorded adjective, while others think it came into English from the Middle Low German dul, because there is a gap between when the Old English term disappeared and the Middle English dull appeared. Either way, it can be traced back to the Proto-Germanic dulaz, and possibly the Proto-Indo-European root dhul-, from dheu– (dust, vapor or smoke). Dull is related to the Old Frisian dol (reckless), the Middle Dutch dol or dul (stupid, foolish or crazy), the Old Saxon dol and Old High German tol (foolish or dull), the German toll (‘mad or wild,’ also used colloquially now as ‘great’ or ‘cool’), and the Gothic dwals (foolish), as well as the Greek tholos (mud or dirt), the Old Irish dall (blind), and English words such as fume, funk, perfume, typhoon and typhus. The meaning ‘not pleasing, tedious or uninteresting’ appeared in the late 14th century, and the adjective’s sense expanded to describe colors that are not bright or clear in the mid-15th century, and (originally figuratively) to a sensation or pain that is not sharp or intense in the early 18th century. The verb, meaning ‘to lessen the vigor, activity or sensitiveness’ of something, also dates back to around the year 1200, and comes from the adjective. The meanings ‘to make blunt or less sharp’ (about edges or points) and ‘to make less bright or clear’ (of colors) both appeared in the late 14th century. The intransitive sense, ‘to lose vigor or intensity,’ is also from the late 14th century.

See full definition
Learn more about dull in our forums

Dull in other languages